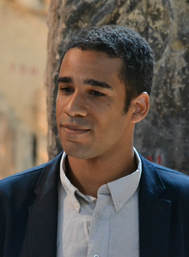 ​Born in 1986, Pascal Adoumbou first discovered choral singing at the summer festival Choralies of Vaison-La-Romaine in August 2004 and decided to create a youth choir in Lyon and started training in choral conducting. In 2005 he entered the French National Youth Choir under the direction of Valerie Fayet. With this group, he was awarded 5 First Prizes at the Arezzo Choral Singing Contest in 2008 and discovered the European Grand Prix of Choral Singing 2008.  He also took part in the Florilege Vocal de Tours Choral Singing Contest with the Ensemble Vocal Alter Echo (Lyon) in 2008.

He graduated in Composition, History of Music, Ethnomusicology, Analysis, Musical Theory and Choral Conducting between 2009 and 2011. He then entered the Lyon National and Superior Conservatory of Music and Dance, the only school in France to deliver a Master’s Degree in Choral Conducting. He passed his Bachelor’s degree and National and Superior Diploma of Professional Musician in 2013 and his Master’s degree in 2015 in the class of Nicole Corti. He also holds the State Diploma in Vocal Ensemble Conducting, which allows him to work as a Choral Singing Teacher in French conservatories.

​He is the current director of the choirs of the Catholic University of Lyon (UCLy), the choirs of the city of Vienne, France and the gospel choir One Step from Lausanne, Switzerland. In 2018 he was appointed Artistic Director and Choir Master of inChorus, a vocal ensemble which gathers former singers from the French National Youth Choir 2014-2017.  He also conducts Color, a professional vocal ensemble he created in 2012 to perform mainly modern and contemporary music. He collaborates with Lyon National Opera, Lyon National Orchestra, Lille National Orchestra, the Choralies, A Coeur Joie, the Medicis public establishment, the French Ministry of Culture, the choir La cigale from Lyon, the Geneva High School of Music, the Berlioz Festival, and Spirito. In 2018 assisted the Conductor Alexandre Bloch and to lead the preparation of all the choirs for Bernstein's Mass with Lille National Orchestra. He also composes, and has created a contemporary choral work every year since 2013. In 2019, he will create a Missa Laudato si, emerging from a composition contest held by the Diocese of Lyon. 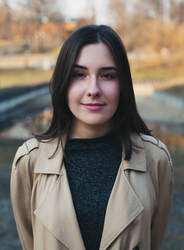 Maria Avdeyeva is 23 year old choral conductor from Russia. She holds a First Class Honors and a Bachelor of Music degree in Choral Conducting from the Ippolitov-Ivanov Moscow State Musical and Pedagogical Institute (2014). Now she is continuing her study for a Master’s degree in Choral Conducting at the Tchaikovsky Moscow State Conservatory (Prof. Alexey Rudnevskiy).

Since 2014, working as the Choirmaster for the Concert Choir and Teacher of Sol-fa for Children’s Choral Studio Sozvuchiye in Moscow, Maria has been actively developing Russian children’s choral education. In December 2017 Maria became a Laureate in the Competition of Educational Projects for V International Teacher’s of Musical Theoretical Disciplines Assembly in Moscow with her specialty in teaching Sol-fa in Choral Departments of Children’s Music Schools. In 2015 she was recognized as a member of the National Choral Society and in 2016 she completed courses with the International Choral Conducting Summer School, University of Limerick, and the DIT Conservatory of Music and Drama (Dublin). In 2017 she won a scholarship from Peter and Luise Hager Foundation and the ME Saar Foundation and became the active participant of Conductor’s Academy of Summer School of HfM University of Music Saar in Germany (prof. Georg Grün).

​Since April 2018, Maria has held the post of the Choirmaster the Moscow State University Academic Choir (dir. Mirza Askeroff). She was one of selected singers for EuroChoir 2018, and starting in September 2018 she will assume the position of the Artistic Director for the Concert Choir and Teacher of Sol-fa of Aleksandroff State Children’s Music School in Moscow. In April 2018 Maria founded the New Youth Chamber Choir. 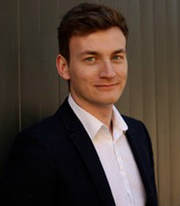 Jack Apperley is London based freelance conductor. Under the tutelage of Patrick Russill, he graduated from the Royal Academy of Music where he obtained a Masters in Choral Conducting. He was awarded a Distinction and received the Sir Thomas Armstrong Choral Leadership Prize. Prior to this, Jack read Music at the University of Birmingham where he was mentored by Simon Halsey CBE. Jack is the Music Director and Conductor of the Imperial College Chamber Choir and Concordia Voices. He is the Interim Music Director for Brentwood Choral Society and also directs several workplace choirs, for the John Lewis Partnership, the Royal College of Physicians and the Silicon Valley Bank. In 2018 Jack was the Guest Conductor of the Epsom Chamber Choir.

Jack is an assistant to Simon Halsey and the London Symphony Chorus. This role has seen Jack stand in as Chorus Master for a performance of John Adam’s oratorio El Niňo in Paris with the London Symphony Orchestra, conducted by the composer as well as assist in preparing the chorus for performances of Liszt's Faust Symphony, Bernstein's Chichester Psalms, Beethoven's Ninth Symphony and Britten's Spring Symphony.

As assistant conductor to Ralph Allwood and the Rodolfus Choir, Jack assisted in preparing the ensemble for their recent tour across the Lake District and the South East of England. Whilst at the Academy, Jack participated in several masterclasses with ensembles such as the BBC Singers and the Clarion Choir as well as receiving tuition from Paul Brough, Jamie Burton, David Hill, Amy Bebbington and Roland Börger. Jack has also attended several summer schools hosted by Sing for Pleasure and the Yale School of Music where he was tutored by Manvinder Rattan, Sarah Tennant-Flowers and Simon Carrington respectively.

Highlights for the 2018 – 2019 season include “A Concert for Peace” with Concordia Voices and Richmond Shakespeare Society featuring a performance of the Duruflé interleaved with poetry from the First World War; a semi-staged performance of Britten’s St Nicolas with Brentwood Choral Society and the Choirs’ of Brentwood Cathedral; and the first creative collaboration with the Imperial College Chamber Choir featuring performances of Parry’s Songs of Farewell and Palestrina’s Stabat Mater. Jack feels privileged to be competing in the Grand Final of the inaugural London International Choral Conducting Competition. 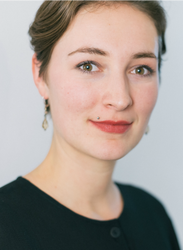 The conductor Julia Selina Blank (born 1989 in Germany) has international experience in leading ensembles, choirs and orchestras. She studied conducting at the University of Music and Performing Arts in Munich with Michael Gläser, at the Royal Academy of Music in Stockholm with Fredrik Malmberg and completed her master's degree at the Norwegian Academy of Music with Grete Pedersen.

As part of her studies she has held concerts with the professional ensembles Munich Symphonics and the Norwegian Soloists' Choir. Furthermore, she has participated in master classes with Stefan Parkman, Daniel Reuss and Anders Eby. From 2016-18 she was musical assistant in the Norwegian Soloists' Choir. As a scholar of the German “Dirigentenforum” for young choral conductors she has worked with the radio choirs of WDR and NDR, and with the Philharmonic Choir Berlin. She founded the young professional group “Junges Vokalensemble München” in Germany with whom she regularly stages various performances of vocal music, including concerts in unusual settings and crossover projects.

​From 2015-18 she conducted the ensemble in the prize-winning music theatre “Mittelreich” at the Münchner Kammerspiele in Germany. In 2018, she founded and premiered with the north-European female choir DAME. The aim of this group is to perform choral music for female voices on a professional level and to exchange language skills, sound aesthetics and singing styles across national borders. In her newly chosen home Oslo, Norway, she is the conductor of the mixed choirs Asker Chamber Choir and Norske Kammersangere. In winter 2018 she will lead Handel´s Messiah with renowned soloists and the Norwegian baroque ensemble “Barokkanerne”. 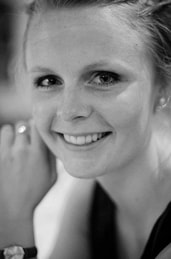 Rebecka Gustafsson was born in Småland in south of Sweden. Her musical path started with choral singing, piano, cello and organ. She studied piano and choral singing at Södra Vätterbygdens Folkhögskola in Jönköping, Sweden. After this she continued to The Music Academy in Örebro, where she studied music education, with focus on classical singing. During these years Rebecka’s interest for conducting grew, and in 2014 she started a Bachelor’s in Choral Conducting at the Royal College of Music in Stockholm with Mats Nilsson and Fredrik Malmberg.

​In April 2017 Rebecka had her Bachelor’s exam project with The Swedish Radio Choir, where she conducted music from Mahler, Mendelssohn and Maconchy. In the autumn of 2017 she started her Master’s in Choral Conducting at The Norwegian Academy of Music in Oslo, with Grete Pedersen. Rebecka has worked with choirs like Chamber Choir Musikaliska, Arvika Chamber Choir, Uppsala Vocal Ensemble and Jönköping Chamber Choir. She has also done projects with orchestras like Karlstad Symphony Orchestra and Karlskoga Symphony Orchestra. Since October 2015 she has been the conductor and Artistic Director of the male choir Västgöta Nations Manskör Korgossarna in Uppsala. During her current studies in Oslo Rebecka is also assisting Grete Pedersen in her work with The Norwegian Soloists' Choir. 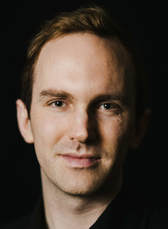 Jono Palmer is a dynamic and enterprising young conductor from Auckland, New Zealand. Currently an Associate Instructor and doctoral student in Choral Conducting at Indiana University Jacobs School of Music, he maintains a link to New Zealand in his work as Artistic Programme Coordinator for Choral Connect, the New Zealand Choral Federation Association of Choral Directors National Conference, and as a part-time high school teacher. His choirs have won national and international acclaim, including two Gold Medals at the 2015 Grand Prix of Nations in Magdeburg, Germany.

As a conductor, Jono has been selected for masterclasses at the 11th World Symposium on Choral Music and the National Collegiate Choral Organization 7th Biennial National Conference. In 2012, Jono was awarded the Conductor’s Development Prize at the NZCF Auckland Regional Big Sing Festival. A versatile baritone, Jono has performed with many of the leading choirs in New Zealand, including Voices New Zealand Chamber Choir, New Zealand Youth Choir, New Zealand Secondary Students Choir, New Zealand Opera Chorus, and the early music ensemble Voices of the Age of Discovery.